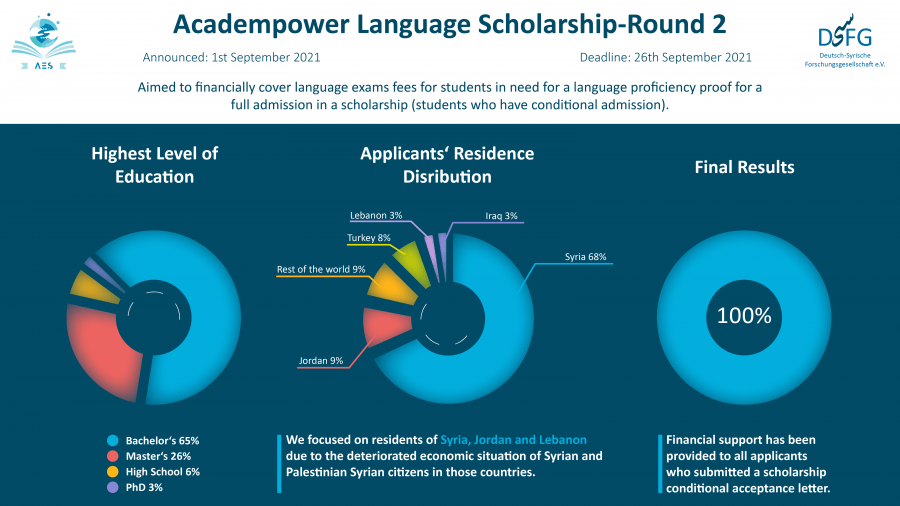 In September 2021, we launched the second round of our (Academpower Langauge Exam Scholarship) as part of the German Syrian Research Society, with the aim to fund the language exam Syrian students need in their application for international scholarships. Due to the large number of applications and the limitation of our resources, we could at this time only accept students who were accepted or short-listed in an international scholarship, and in an urgent need to provide an international language certification (such as TOEFL, EILTS, TELC, … etc Additionally, we focused on residents of Syria, Jordan and Lebanon due to the deteriorated economic situation of Syrian and Palestinian Syrian citizens in those countries.

By the time of application, 11% of the applicants who are residents in Syria, Jordan and Lebanon announced that they are accepted/short-listed in a scholarship; around 42% of those did not provide a valid documentation of their status. All applicants, who provided a documentation of their status as accepted/short-listed in an international scholarship, were granted the financial support for the language exam. We either paid on their behalf, or reimbursed the fees.

This website uses cookies to improve your experience while you navigate through the website. Out of these, the cookies that are categorized as necessary are stored on your browser as they are essential for the working of basic functionalities of the website. We also use third-party cookies that help us analyze and understand how you use this website. These cookies will be stored in your browser only with your consent. You also have the option to opt-out of these cookies. But opting out of some of these cookies may affect your browsing experience.
Necessary Always Enabled
Necessary cookies are absolutely essential for the website to function properly. These cookies ensure basic functionalities and security features of the website, anonymously.
Functional
Functional cookies help to perform certain functionalities like sharing the content of the website on social media platforms, collect feedbacks, and other third-party features.
Performance
Performance cookies are used to understand and analyze the key performance indexes of the website which helps in delivering a better user experience for the visitors.
Analytics
Analytical cookies are used to understand how visitors interact with the website. These cookies help provide information on metrics the number of visitors, bounce rate, traffic source, etc.
Advertisement
Advertisement cookies are used to provide visitors with relevant ads and marketing campaigns. These cookies track visitors across websites and collect information to provide customized ads.
Others
Other uncategorized cookies are those that are being analyzed and have not been classified into a category as yet.
SAVE & ACCEPT